Darien Running Company plans to be in business by July.

Even in the midst of a pandemic there is some welcome good news in run specialty and this time it comes from Connecticut where Megan Searfoss, owner of Ridgefield Running Co., revealed last week that she is opening a second store in nearby Darien, CT. It will be called, appropriately, Darien Running Company, or DRC for short.

As Searfoss told Running Insight, she is making lemonade out of lemons in a challenging retail environment.

“I believe that when we get ourselves out of this crisis, that Main Street small business and especially run specialty will be strong,” she said. (Ironically, she had planned to announce the new store at a big reveal at the store last Wednesday as part of Global Running Day celebrations, but the event was cancelled because of the social unrest around the country. Instead, the planned new store – along with Ridgefield Running Company’s selection as one of Best Running Stores in America by The Running Event – was announced in a company newsletter on Thursday.)

The store is located at 14 Brook Street in downtown Darien and, as Searfoss said in making the announcement,  as Ridgefield Running worked every day the past three months to survive a mandated closing, she began to revisit what run specialty offers a community.

“I believe in small business, I believe in community and I began to believe again that Darien Running Company should open,” she said. 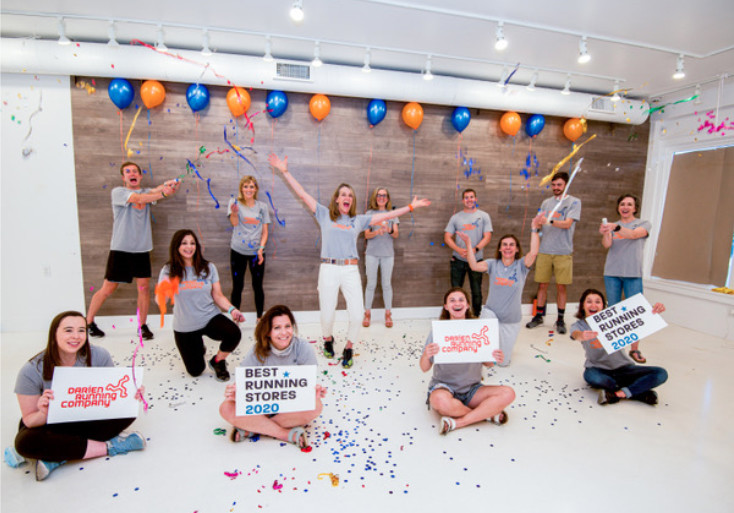 Darien Running Company is scheduled to open in July.

The newsletter announcement explained the process in recent months:

“Prior to the pandemic, when the Boston Marathon, the Olympics and many spring events were happening, RRC had planned to expand to the beach. A small, white brick building just off the Post Road in Darien was the perfect location.

“Next to the Sugar Bowl, Uncle’s Deli, Gopher Ice Cream, Neat Coffee and many other wonderful small businesses, the location was set for Darien Running Company.

“Then COVID-19 came, forcing Ridgefield Running Company to close and reinvent our business to online, same-day delivery and curbside pick-up. Running as it always has, provided solace for us during this unsettling time. People that have never run before are out on the move finding peace in the roads and on the trails. Running isn’t cancelled.”

Searfoss said the purchase of the Darien store was facilitated by Darien developers Penny Glassmeyer and David Genovese, who are responsible for the development and redevelopment of downtown Darien, and the soon-to-be-built Corbin District.,

“DRC will offer the same services as Ridgefield Running Company, now retooled to provide a safe and trusted environment,” Searfoss added. “Our training programs, clinics and group runs will happen as soon as it is safe.”