It was a familiar route — a course Joe Vukits had completed over 100 times, and then, darkness.

It was a familiar route — a course Joe Vukits had completed over 100 times since moving into his Bolingbrook, IL, home in August 2019.

Vukits, a member of Chicago’s Fast Track Racing Team since 2009, was finishing up a six-mile run on May 23, a final tune-up before competing in the Soldier Field 10 Mile in the coming weekend. He was at a stoplight three blocks and two turns from his house.

The next thing Vukits remembers is waking up in a bed at Good Samaritan Hospital. He stared up at his wife, Nicole. He asked what happened. Nicole could only tell him a tow truck hit him and that he was, quite remarkably, alive. The 37-year-old faced a litany of injuries. A fractured clavicle and fractured pelvis. Collapsed lungs. A dozen broken ribs. A concussion. The list went on, too. For a while.

Vukits’ hospital stay lasted 19 days before he graduated onto a nearly three-week stint in inpatient rehab. On June 28, 36 days after going off on that familiar six-mile run, Vukits finally made it home, wrapped in a back brace and needing a walker to stabilize each step.

“I had to keep reminding myself that my comeback story would come,” Vukits says.

The news of Vukits’ hospitalization spread quickly throughout the local running community, including at Xtra Mile Running, the Schaumburg, IL-based run shop where Vukits often participated in store activities.

In fact, more than 100 people connected to Xtra Mile Running and the Fast Track Racing Team assembled at Busse Woods on Memorial Day 2022 for an impromptu Run for Joe. In a nod to Vukits’ colorful personality, many wore sports jerseys and T-shirts of professional wrestling stars.

“It was striking how many people came out who never even met Joe. Still, they wanted to be a part of this community showing their support,” says Xtra Mile Running owner Chris Schiel, who has known Vukits for over a decade.

Beyond the Run for Joe, many contributed to a GoFundMe campaign started by Nicole, an effort that raised nearly $30,000 to assist Vukits’ recovery. Others, meanwhile, called, sent texts or cards, tagged Vukits in social media posts or visited his home. For Vukits, who admits to encountering some “bad days” following the incident, the encouragement and well wishes from his fellow runners provided comfort, inspiration and motivation.

“Besides marrying my wife and my family, this is perhaps the most meaningful thing that’s ever happened in my life,” Vukits says.

Schiel says the running community’s willingness to rally around Vukits underscores the vital role run shops play as the flagbearer and connective tissue for run culture in their respective communities.

“Joe’s story is a reminder of how running stores can make important contributions and create reciprocal relationships that impact people in profound ways,” Schiel says. 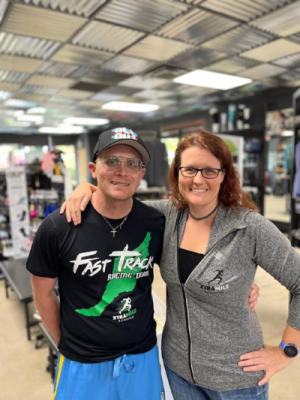 While recovering in the hospital, a doctor told Vukits he’d be back running by December if he followed doctor’s orders. Committed to pushing himself within the parameters of his recovery team’s directives, Vukits embraced recovery one step at a time. Literally.

He began walking at the end of June, beginning with out-and-back routes on his block before eventually progressing to tours around the block.

By the end of July, Vukits ditched the back brace and walked with a cane, aiming to do at least 5000 steps each day.

On August 30, he ran a quarter mile. By week’s end, he completed a full mile run.

On October 9, the same week he returned to work as a quality control technician for a construction materials company, Vukits completed the Cheesy Pretzel 5k near his Bolingbrook home in 26:24.

“I tried to be safe and smart about pushing the needle,” he says. “Sure, I wanted to be back quicker, but I also didn’t want to trigger any setbacks.”

After adding two miles to each week’s previous total, Vukits recorded a 17-mile week at the close of October. Continuing the same conservative progression, Vukits hopes to exceed 35 weekly miles by the end of 2022, a tally matching his pre-accident routine. He has set his eyes on running the Illinois Half Marathon next April.

“If my body allows it, I’ll be there,” says Vukits, who recoils at those calling his recovery an inspiration. “As runners, I think we all know that anyone who steps foot out their door for a run is an inspiration. What we do takes toughness and so plenty of people are doing inspiring things each day by simply lacing their shoes up and getting out there.”