Mizuno rep and former Gazelle salesman turns a life-threatening event into an effort to increase safety at run specialty stores.

Ted Kushion isn’t the type of guy to let a little cardiac arrest – actually, much more than just a “little” cardiac arrest, but more on that later – stop him. The story of the sales rep for Mizuno Running and former Gazelle Sports buyer is about taking a life-threatening event and using it to find a way to do some good in his local community and, even more ambitiously, in the run specialty retail world as well.

Kushion spent a total of 13 years at Gazelle Sports, first as an assistant manager coordinating staff training and then as a key shoe buyer, working closely alongside one of the store’s owners, Ken Sung. In 2016 he moved on to his current job with Mizuno as an Upper Midwest sales rep.

But his life-changing moment, as recounted in a Gazelle Sports blog, occurred late in the summer of 2019: 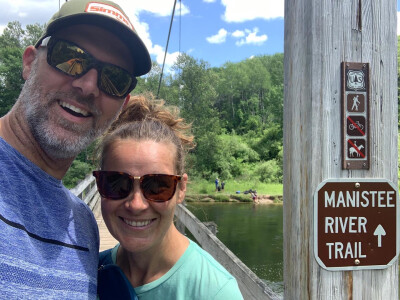 “It was at the tail end of summer when Ted’s heart stopped. Literally stopped beating. His family had just gotten home after a Labor Day weekend spent up north at Ted’s parents. Ted and his wife, Deb, were unwinding, watching a movie together. None of them knew that something was very wrong with Ted’s heart. None of them knew that his heart would stop beating for over 15 minutes.

“Ted’s wife, his high school sweetheart who - no doubt - saved his life by administering CPR until help would arrive with an AED (Automated Electronic Defibrillator), which would zap Ted’s heart back into some semblance of normal rhythm.”

By the time paramedics shocked him with the AED, Kushion had been without a pulse for 20 minutes.

Rushed to the hospital, he was placed on a ventilator and after three days of being in a medically induced coma he finally regained consciousness. He couldn’t speak since his vocal chords were damaged when he was intubated and he had frontal lobe damage and memory issues. And no one could tell him what caused his heart to stop. From the battery of tests the hospital administered, his heart appeared completely healthy. 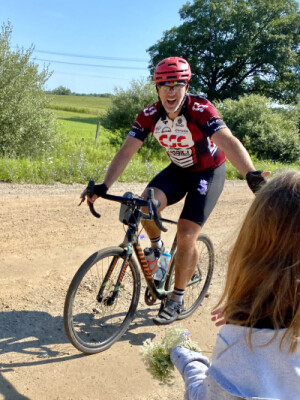 He was told recovery would be a long road, that six months would be an optimistic prognosis for some semblance of normalcy. But he was biking only two weeks after being released from the hospital and he dedicated himself to getting back to work, getting back to normalcy.

That’s where the story really takes off. Realizing that the AED literally brought him back to life, Kushion, an avid runner and biker, looked for a way to turn his oft-repeated story into a positive. “It’s difficult to tell the story over and over, so I wanted to change the conversation to something more positive,” he explains.

The result – a series of fundraising efforts at some of the stores he sells to in the Upper Midwest to raise enough money for them to purchase and install an AED at their stores — each AED costs approximately $1000, a lot of money for a much-needed, but often overlooked, piece of safety equipment.

(An AED, or automated external defibrillator, is used to help those experiencing sudden cardiac arrest. It’s a sophisticated, yet easy-to-use, medical device that can analyze the heart’s rhythm and, if necessary, deliver an electrical shock, or defibrillation, to help the heart re-establish an effective rhythm.)

Kushion points out that run retailers are often the focal point of a local running community, hosting run groups and sponsoring races and educational events. There is certainly a need for a safety precaution such as an AED and he wants to spread the word.

“The AED was what ultimately saved my life,” Kushion says. “And running stores don’t generally have the money to put into something like an AED. They’re essentially a luxury for any retail store.

“But running stores who host runners also have a higher risk,” he adds. “There’s any number of things that can happen. So I want to do what I can to make sure the people and stores that I love and care about have the tools they need to handle any situation.” 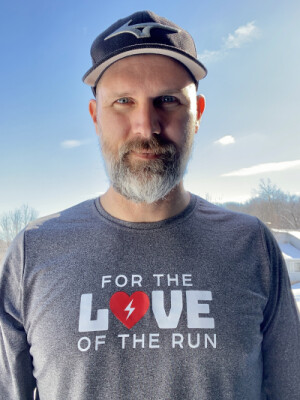 Running Lab was the first store to participate as Kushion tested the viability of the fundraiser with a smaller store. Then Gazelle committed right away and has been an active partner — this past February the chain did a big Valentine’s Day campaign around it. Striders and Ann Arbor Running Co. also participated and Hanson’s has committed to doing it this fall.

His story even inspired Mizuno Running to provide CPR training at its sales conference while Kushion was recovering from his cardiac arrest.

While he stresses that he is certainly not in the fundraising or events business, Kushion is putting the effort into spreading the word about how important this life-saving piece of equipment can be for a running store and how it can be an excellent community effort to raise the funds. He welcomes any retailer to reach out to him for thoughts on how to jump start any AED fundraising effort.

“It is a natural cause for the run community because it directly impacts their members and a store’s customers,” Kushion stresses. “It’s a win-win for everyone.”

Ted Kushion can be reached at [email protected]

Saucony Collaborates With Children’s Hospitals To Empower Kids Through Design