Running for a RADD Reason

For Judge David Reich, his North Dakota courtroom too often felt like the film “Groundhog Day,” the classic Bill Murray epic in which the lead character relives the same day over and over: a repeating cascade of familiar faces and familiar scenes in a familiar setting.

A defendant would be arrested on drug or alcohol-related charges, plead guilty or be found guilty and then sentenced — ordered not to drink or use drugs, required to obtain an evaluation, placed on probation and returned to the same environment in which he or she was first arrested. “So many lives wasted by addiction,” thought Reich, a judge since 2004 who estimates that 90 percent of his criminal cases in Bismarck, ND, involve substance abuse offenses.

The repetitive cycle spurred a frustrated Reich to consider alternatives. 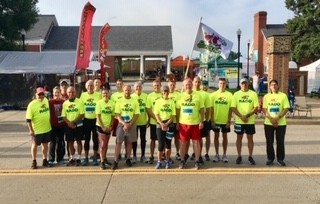 Today, Reich’s Runners Against Destructive Decisions (RADD) helps those struggling with substance abuse find stability and community through the transformational power of running.
“Running is a piece of their recovery and a release that helps these individuals balance out their lives,” Reich says of the six-year-old RADD program.

A self-described Clydesdale runner, Reich had run cross-country as a North Dakota high schooler, albeit reluctantly as a pre-requisite for basketball.

“I actually hated running,” he says. At age 48, however, Reich returned to the sport at the prompting of his daughter, who joined her high school cross-country team and sought a running partner. While running provided Reich valuable time with his daughter, he found the regular exercise energized his body and mind. He wondered if running might do the same for many of the defendants visiting his courtroom.

So Reich began exploring research tying regular exercise to improved mental health and sobriety, while also learning about running programs in prisons and probationary programs. He then read a Runner’s World story about Leane Guerrero, a former meth dealer who, while in prison, found running as an antidote to the ills that had plagued her life. Upon her release, Guerrero continued finding stability, sobriety and serenity with each running stride.
“Leane’s story was exactly what I wanted to create,” Reich says.
He hosted RADD’s first group run on April 22, 2014, optimistic that a cool spring day would encourage participation. Instead, cold temperatures and sleet covered Bismarck and only a half-dozen people showed up.

“But we started, which is often the most difficult part,” Reich says.
Over the subsequent months, Reich continued championing RADD to his fellow drug court judges, contacted treatment centers and local law enforcement agencies and introduced the program to defendants in his courtroom, urging them to give RADD an eight-week trial.

“The biggest challenge is getting people there the first time,” Reich says, adding that the presence of probation officers and addiction counselors often aids attendance. As spring rolled into summer, attendance at RADD’s weekly runs began to climb.
“When we started, we didn’t know where this was headed, but we got momentum and things began building from there,” Reich says.

Today, RADD meets three days a week throughout the year — Bismarck’s frigid winter weather be damned. Initially, RADD participants seek to complete a 5K run or walk. The organization pays race entry fees and supplies running shoes for many of its dedicated participants, an investment on par with one night in the county detention center.

“And I think we can get a much better return on our investment with running shoes,” Reich says. Beyond the benefits of regular exercise, Reich says RADD provides participants a sense of community. It shatters perceptions about addiction and triggers news relationships. After the group’s Saturday morning runs, upwards of 25 participants enjoy coffee, bagels and other delights while talking — employing proper social distancing techniques, of course.. The community feel, Reich says, is as important as the physical exercise.

“On those Saturday mornings, we’re just people out for a run and enjoying the company of others,” Reich says, reminding that addiction touches all classes, colors and creeds. “Running has a beautiful way of leveling the playing field.”
Ask Reich about the power of RADD and he doesn’t hesitate to point to Jack Beck.

One of RADD’s original attendees back in April 2014, Beck, then 42, claimed a long history of substance abuse and criminal troubles. He showed up in basketball shoes and offered little eye contact and few words.Yet, Beck returned the following week and then the week after that. Reich got him running shoes and marveled at his progress. “You could physically see the changes in him,” Reich recalls.

In June, eight weeks after attending the inaugural RADD run with his probation officer, Beck finished his first 5K. Weeks later, he completed another and soon after began chasing new goals — 10Ks and half marathons. In the process, Beck reunited with family and, save one short relapse with alcohol addressed with an early intervention, has been a model citizen.

“Talk with guys like Jack Beck and others who’ve been with the program for a while and you learn that RADD has made a world of difference in their lives,” Reich says. 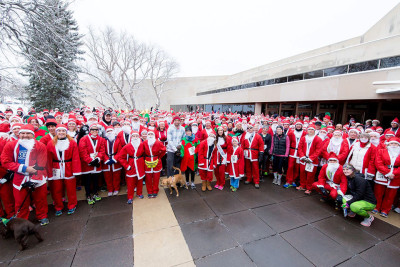 RADD, meanwhile, continues growing in numbers, visibility and strength. An annual Santa Run, started in 2014, brings some 500 runners to Bismarck each December for a 5K event that raises awareness of addiction issues and champions RADD’s cause, while the organization has crafted new partnerships as well.

In 2018, two employees from the Missouri River Correctional Center (MRCC), Brianne Torres and Candace Rittenbach, began joining the RADD group on Saturdays. Torres and Rittenbach’s presence led Reich to bring RADD to the correctional center once each month. In May 2019, Reich and 17 inmates went for a run. In June, the number jumped to 27. In August, 106 of the facility’s 190 inmates participated.

Reich now hopes to import the RADD program to other cities around North Dakota and is currently helping to facilitate the launch of a group in Fargo. “We’ve been building community, generating more visibility, opening new doors and getting people to believe in the mission,” the 63-year-old Reich says.

Now given the nature of addiction and the resolve required to maintain sobriety, Reich admits sustained growth can be difficult. He acknowledges some RADD participants have continued to struggle with addiction, yet Reich refuses to surrender RADD’s mission. “It’s quality over quantity for us,” he says. “If we can get a few people each year moving on the right path, that’s success.”