The Sayville Running Company had options – and it wasn’t afraid to use them. 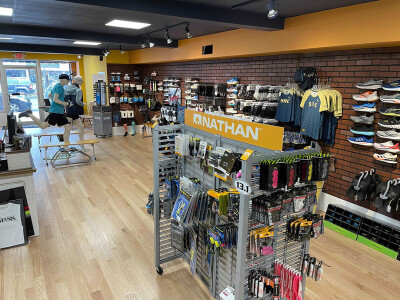 “We felt like we had some negotiating power,” Barrett says, noting that the total rent overhead at Sayville Running Company’s new home is less than what the store was paying at its similarly sized previous spot. “In the end, we found something that was a small compromise and even better in some other ways. Moving’s never fun, but I’m happy we did it.”

Sayville Running Company’s move speaks to a notable industry theme that emerged in 2021: spurred by favorable commercial real estate market conditions as well as strong store performance figures, numerous running retailers have changed addresses, expanded or added an additional unit over recent months. As a result, various run shops across the U.S. now inhabit bigger storefronts, more prominent locations or are capturing bottom line-driving benefits that have them well positioned for the future.

After 10 years at 328 Main Street in downtown Brighton, MI, the Running Lab moved into a new 4400-square-foot space across Main Street last spring. Running Lab owner Ken Larscheid had been contemplating a move for more than two years, eager to escape his cramped 1000-square foot space in a long and narrow downtown building. Taking advantage of favorable interest rates, he purchased the building at 409 Main in Brighton, simultaneously giving Running Lab a new home and diversifying his holdings.

“Regardless of where run specialty is in 20 years, the building will still have use for something,” Larscheid says. 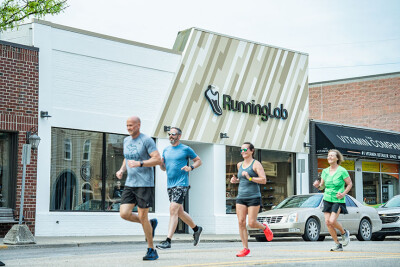 Discarded by his previous landlord who had a new tenant lined up, Richard Dafoe moved See Dick Run into the redeveloping downtown of Grand Forks, ND, earlier this year.

“I’m paying $150 more a month for a space that’s nearly double the size of my old location and downtown,” Dafoe beams.

“There’s a lot more visibility in this location,” Schiel says of Schaumburg Town Square, where he found leasing rates 30 percent lower than 2018. His new landlord also assisted with rent abatement and store buildout.

Complete Runner owner Brad Brown purchased a commercial building in Grand Blanc, MI, and opened a second store in February to complement the company’s flagship location in nearby Flint.

Runner’s Edge, a staple of Long Island, NY, for decades, similarly doubled its store count with the opening of a second storefront in Huntington to accompany its Farmingdale shop.

In May, Palmetto Running Company gobbled up two vacant spaces adjacent to its Hilton Head, SC, store. As a result, Palmetto nearly tripled its footprint from 1050-square feet to 2800-square feet.

The Aid Station departed its original home in Auburn, CA, for a bigger, more prominent location down the street; the Ann Arbor Running Company crew relocated its downtown location into a sterling new space on South Ashley Street; and Running Wild recently began welcoming customers into its new location in Fairhope, AL.

With run shops leveraging market conditions to grab more prominent locations, add new units or capture cost savings, the Sayville Running Company’s Barrett is among the many industry insiders optimistic that run specialty retail sits – quite literally in many cases – in a promising long-term position.

“So many of us are in a better spot today and that sets us up for good things in the future,” Barrett says.

Running Lab Expanding In The Midst of a Pandemic