While much has changed on the running scene since 1982, Ragged Mountain Running & Walking Shop remains, at its core, much the same.

The Charlottesville, VA-based run speciality shop is still operated by the Lorenzoni clan, still sits on Elliewood Avenue and still adheres to a fundamental customer service principle rooted in the golden rule. It is, after all, a battle-tested formula responsible for carrying Ragged Mountain to its 40th anniversary year in 2022, a milestone achieved by few other U.S. run shops.

“It’s been a wild ride and we’ve been blessed in so many ways,” says Mark Lorenzoni, who opened Ragged Mountain alongside his wife, Cynthia, the same year “E.T” appeared in theatres and Michael Jackson released “Thriller.” 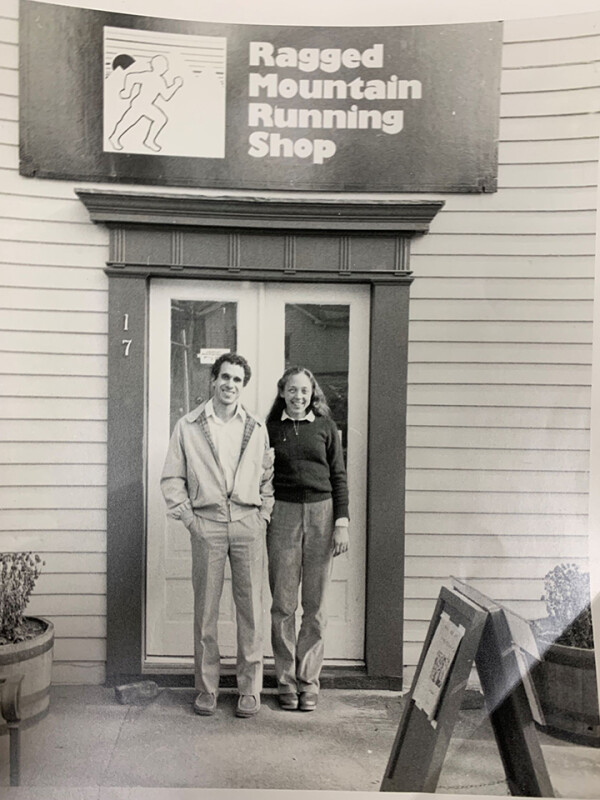 Ragged Mountain gets off the ground

Ragged Mountain’s origins are a case of good coming from bad. Battling injuries as a standout runner for Michigan State University in the 1970s, Cynthia’s coach suggested she work at Frank Shorter’s running shop in East Lansing, MI, to remain connected to the sport. Cynthia fell in love with the environment, so much so she pushed Mark to launch a run shop when the couple – both Michigan State alumni – married in 1980 after relocating to Charlottesville.

The first Ragged Mountain location was a modest, no-frills 500-square-foot space on the second floor of an old Elliewood Avenue home.

“Your classic university town side street,” Mark says of the street running north of the University of Virginia campus.

The shop’s early customers were exclusively runners, often young than 30 and overwhelmingly male – about 80 percent by Mark’s account. On the typical day, the store sold three pairs of shoes.

“I never doubted we were going to make it, but I did wonder how long it was going to take,” Mark confesses.

To build demand and community, the Lorenzonis set up training programs, relays and races like the Chicken Run Five Miler to enliven the local running scene.

“Everything we did in our early years, people thought we were crazy and wasn’t going to work,” Mark says.

Only the levers they pulled did work. Ragged Mountain – a name honoring the nearby offshoot of the Blue Ridge Mountains – gained repeat customers and began attracting patrons from upwards of three hours away to its little commercial slice of runner heaven.

With business growing slowly but steadily, the Lorenzonis moved Ragged Mountain into a new 1500-square-foot, second-floor storefront on Elliewood Avenue and introduced events like the Ragged Mountain Cup, an all-inclusive high school meet for local programs, and The Discovery Dash, an all-kids footrace. When Ragged Mountain’s first employee, Margaret Groos, won the 1988 Olympic Marathon Trials race in Pittsburgh, the store earned added notoriety and credibility with a swelling fitness-oriented populace.

The 21st Century has delivered much of the same for Ragged Mountain: a continued upward climb and the Lorenzonis evolving the business in service to their customers.

After 24 years of functioning in second-floor spaces, Ragged Mountain moved downstairs into a 4000-square-foot storefront in 2006. The street-level shop, which remains Ragged Mountain’s home today, improved the business’ visibility and accessibility.

There have been consistent, dedicated efforts to cater to local clientele and further energize the fitness scene in and around Charlottesville. Ragged Mountain Racing, a post-collegiate team the Lorenzonis co-founded in 2008, has propelled athletes into the Olympic Trials, while the store also offers a monthly group walking club called Ragged Walks.

At the start of 2020, Mark and Cynthia turned the ownership of Ragged Mountain over to their two oldest children, Alec and Audrey, both of whom began working at the store in eighth grade.

While Alec and Audrey might be of a different generation and possess distinct skills from their parents, they embrace familiar principles in their leadership. Before COVID-19 forced stay-at-home orders in the middle of March 2020, Alec lobbied for the store to voluntarily close, a proactive move to protect the store’s older clientele.

“That was a moment we realized we raised these kids right,” Mark says. “They made a decision for the right reasons, not fear, greed or ignorance. It can be hard to stick with that philosophy with so many other temptations out there, but they did.”

When Ragged Mountain sent out an email announcing its temporary closure in the interest of safety, it directed customers to a pair of longstanding, though lightly used, business offerings: Ragged Mountain’s online store and free local delivery. Both exploded.

“We’ve worked really hard, of course, but we’ve also been lucky because this was the right community for us,” Mark says. “People believe in what we do, appreciate it and have partnered with us.”

Today, 40 years in, Ragged Mountain has surpassed 1000 employees and boasts many third-generation customers. Mark, 66, continues to help with staff training, marketing and events while Cynthia, 64, supports back office, merchandising and sales operations. The plan, Mark says, is for he and his wife to step back over the next year or so.