Former addict Todd Crandell plans to complete his 100th Ironman while building a lifesaving nonprofit to help others.

Todd Crandell lets out a deep breath and raises his hands behind his head, walking off the hour-long run he’s just completed. Sweat glistens on his brow, but he isn’t exhausted by this run. If anything, he’s fueled by workouts like this that help clear his mind and keep his body strong and lean. It’s all part of his regimen to stay strong and healthy in body, mind and spirit.

Running isn’t new to Crandell – he’s run thousands of miles over the past three decades – but it’s part of a bigger goal: to complete 100 Ironman competitions. That happens this month when he crosses the finish line at the Ironman World Championships in Kailua-Kona, Hawaii.

Crossing this finish line is more than achieving a personal goal — it’s a testament to the new life Crandell has created.

Crandell wasn’t always an Ironman. In fact, he wasn’t always a runner. The adrenaline of the runner’s high is what courses through his veins these days, but it wasn’t always this way. It took a long time, and a grueling, heartbreaking journey, for Crandell to get to this point.

That’s why it means so much for him to be standing there.

The Start of the Spiral

Crandell’s childhood wasn’t exactly a fairy tale in the making. He grew up in a house where his mom battled addiction, fighting her own demons. She took her own life when he was just three years old.

The aftermath of this loss was profound and he witnessed other family members battle drug and alcohol addictions as well. He wasn’t sure how to deal with the trauma he experienced and didn’t know how to cope with the constant ache that wouldn’t go away.

Crandell was 13-years old when he made the decision to drink alcohol. There was something in the liquid that numbed him, made him feel less hurt, less alone. It helped that ache go away for a while.

He liked that feeling of not feeling.

The use of alcohol increased until, one day it couldn’t keep the pain at bay like it used to. That’s when he decided it was time for something stronger, so he tried drugs for the first time. And thus began the spiral into an abusive pattern of addiction, disappointment, indifference.

“Nothing mattered except where would I get my next fix? How could I continue my high?” Crandell says. “I didn’t see anything, think of anything, really care about anything, except getting high.” He spent the next 13 years in the dark abyss of addiction, struggling to get by.

“I tried everything I could get my hands on — alcohol, prescription pills, crack, heroin, cocaine,” Crandell explains. He ended up homeless and hopeless. The trauma of losing his mother at a young age, coupled with the vicious cycle of addiction, had left him empty and alone. 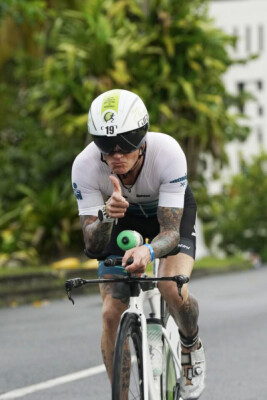 In 1993, Crandell hit rock bottom. He was in and out of jail and found himself contemplating suicide. He was 26-years old, had just gotten his third DUI arrest and he decided it was time to make a change.

“This was the day when I had an awakening,” he explains. “I said I’m done — done with the drugs and the alcohol and the self-loathing. I wanted a different life and I knew I needed to do something different. This was the day I started on a physical, spiritual and emotional quest to improve as a human being.”

And since that day he hasn’t stopped working to become the best, healthiest version of himself. Crandell focused his energy on getting sober and staying sober. When he saw what was possible without the fog of drugs and alcohol, he realized so much was waiting for him.

“With sobriety, anything is possible,” he says.

Crandell turned to exercise as a healthy outlet and decided he wanted to start training for Ironman competitions. “I enjoy the physical challenge of pushing my body to the limits,” he explains.

“Sobriety is just like Ironman. When you’re struggling, when you want to give up — it’s only temporary,” Crandell continues. “The reward of finishing the race is totally applicable to attaining sobriety because life is good.”

Reaching Out To Others

Crandell realized he wanted others to know they could achieve a life free from addiction, too. So in 2001 he created Racing for Recovery, a nonprofit organization based in Toledo, OH, dedicated to helping people from all walks of life overcome addiction.

In addition to being an Ironman, Crandell is a Licensed Professional Clinical Counselor and a Licensed Independent Chemical Dependency Counselor.

“Because I’ve been there, I understand the thought processes and motivations that drive substance abusers and the energy required to maintain a sober life.”

Racing for Recovery is designed to be an alternative to other recovery programs, with a focus on promoting a lifestyle of health, fitness and sobriety.

“We aren’t the usual 12-step program,” Crandell says. “We work to help substance abusers redirect their energy into positive action. We offer counseling services, exercise classes and support groups. But what sets our support groups apart is thatthey are available to everyone affected by addiction — the individuals themselves, their friends and their families.”

Racing for Recovery has helped thousands of people (and their families) change their lives.

“When we surround ourselves with a support system of family and friends, when we stay true to ourselves, when we don’t give up hope, we can make positive change,” Crandell says. “Racing for Recovery helps with all of that.”

Running and training have played a huge role in Crandell’s success over the years. This month, he will compete in the Ironman World Championships in Kailua-Kona, Hawaii. The legendary 140.6-mile journey through the barren lava fields of the Hawaiian Islands will be the ultimate test of strength, grit and heart.

But it’s also a testament to how far he has come. The 2.4-mile ocean swim, 112-mile bike ride and 26.2-mile run takes him further from the life that he once lived. He wants to provide hope to those battling drug and alcohol addiction that there are brighter days ahead — and that change is possible.

“If I can do this, anyone can get sober,” Crandell says.

His goal is growing Racing for Recovery into an in-patient facility. Following his 100th Ironman he plans to leverage that momentum and focus on taking Racing for Recovery to the next level — helping even more people by offering a place where those suffering from addiction and their families can go to focus on themselves and face the challenge of getting sober.

“I want others to be able to stand here, like I am today, and look back and see just how far they could go once they made that choice to become sober.”

For more information, or if you or someone you know needs help: racingforrecovery.org