The editors of Running Insight+ spent the recent holiday season combing through hundreds of photos from The Running Event 2021, held in early December in Austin, TX.

Since we had the time we chose our favorites from the three days of the show and wrote some clever captions to entertain our readers and reminisce about how great it was to get back together face-to-face – and mask-to-mask – for the first time in a long time.

In the photo above, we were wondering if it was the March of the Zombies but, no, it is just the eerie early-morning scene at the Indie5K at the Circuit of The Americas as dedicated runners waited for the sun to rise and warm things up a bit. More than 300 runners did just that. 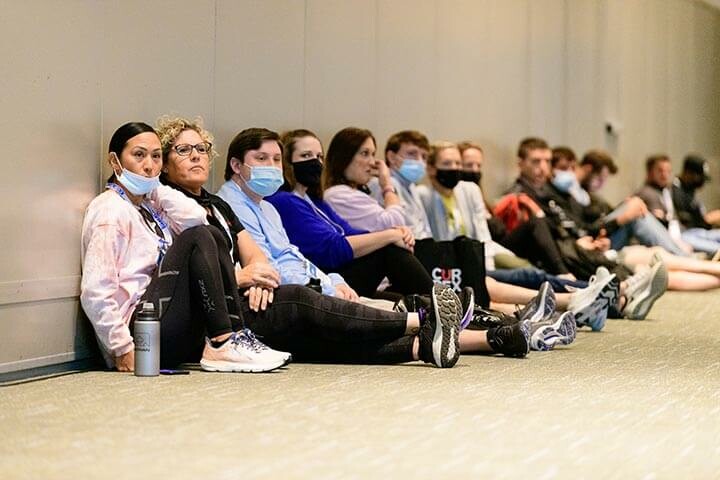 It was SRO – Sitting Room Only – for the keynote presentation by Parker Karnan that opened TRE21. Fortunately running retailers are a flexible group and don’t mind a little floor time when something interesting is going on. 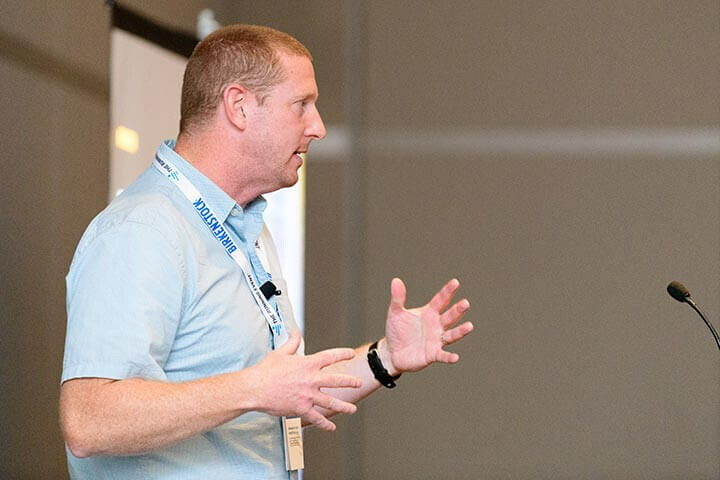 Hey, listen up, this stuff is important! You can be sure Running Insight senior writer Danny Smith had everyone’s full attention as he presented his “101 Great Ideas for Running Retailers.” Here’s one of them as a sure key to success in 2022: Read whatever Danny Smith writes. 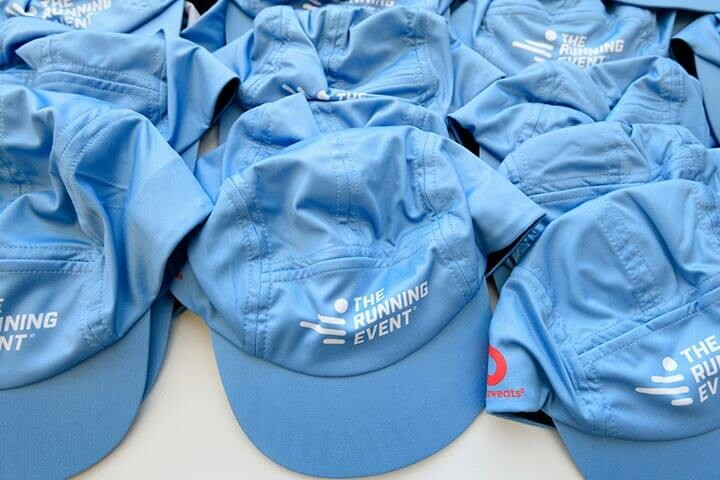 It’s all about the swag at TRE so hopefully everyone got to go home with the cool official TRE21 running caps from Headsweats. We have about a dozen in our office. 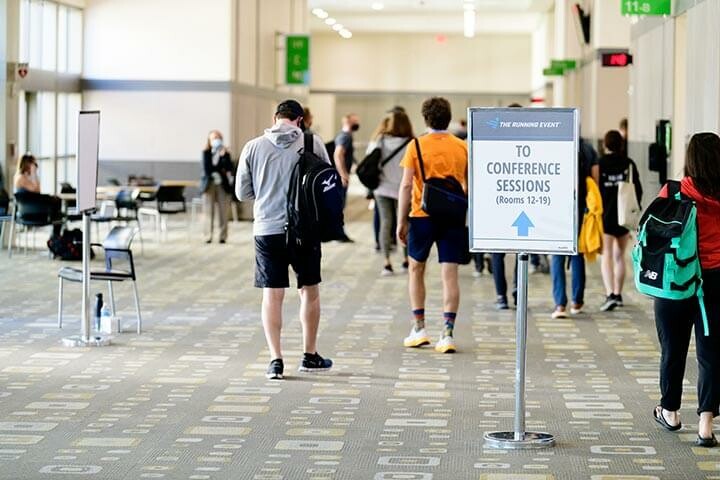 It was just like going back to school again, but you got to wear shorts and learn about running stuff. Much better than math or science. 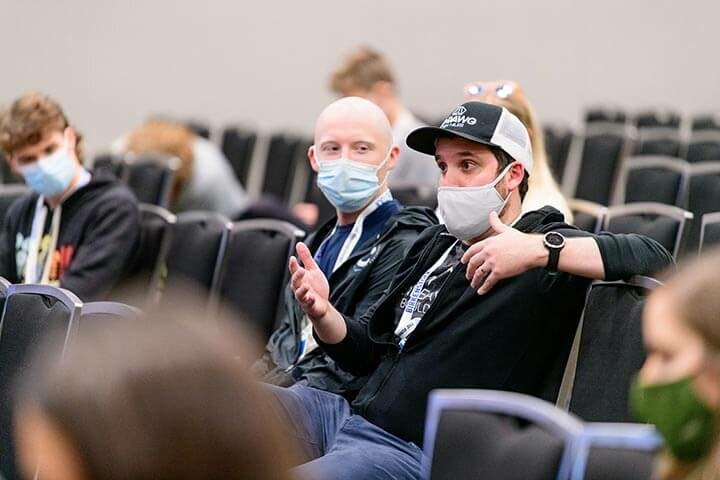 Mask On, Mask Off? No! It was Mask On all of the time while inside the Austin Convention Center, by mandate from the City of Austin. But everyone got used to it and it was certainly better than the alternative of another virtual Zoom meeting. 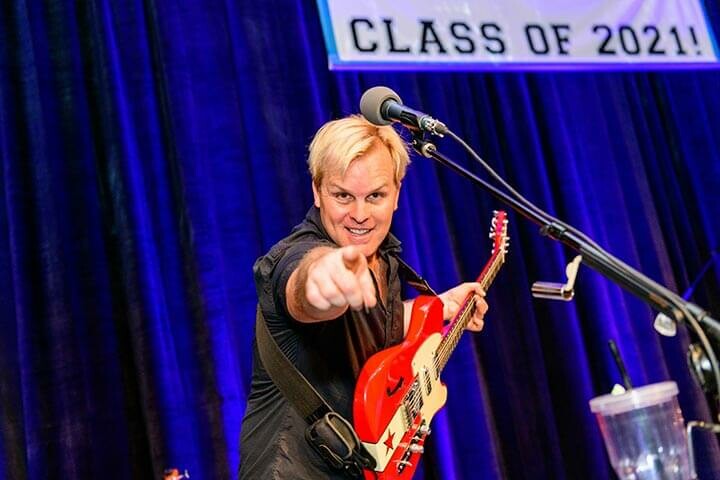 As one attendee put it, TRE was like going to a high school reunion, but you wanted to be there! That was the vibe at the Opening Night party, which had a high school reunion theme and funny photos of running people – along with a rocking band that knew all of the oldies. 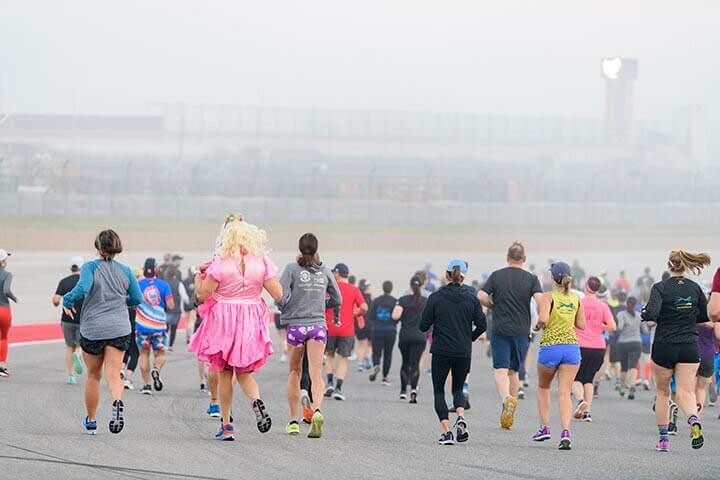 And they’re off, in all sorts of running apparel. Apparently wearing a big pink dress with a blonde wig is part of the 2022 running apparel collection at one major brand. 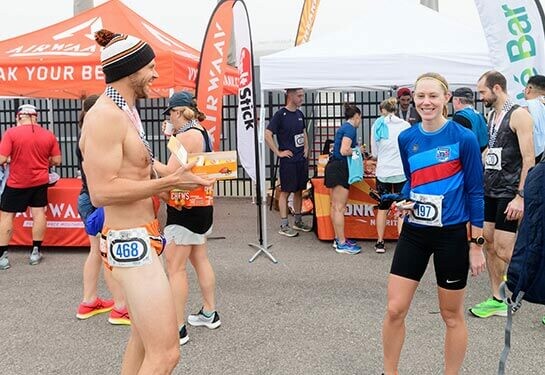 Um, excuse me, sir, but you seem to have forgotten to wear your pants … and your shirt. But at least your hat is keeping you warm. 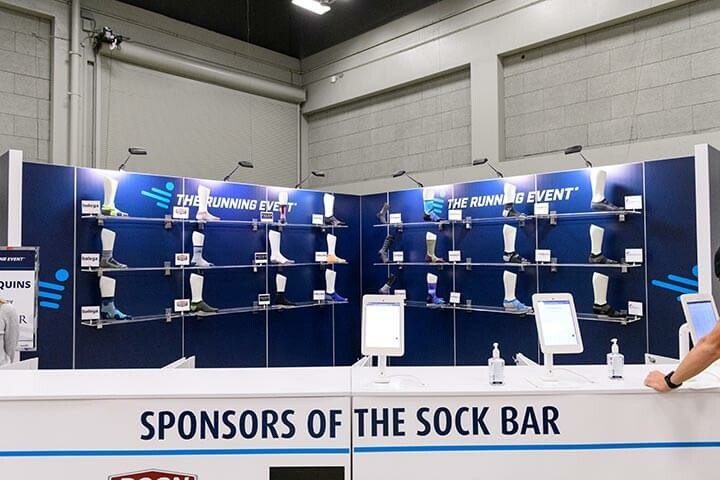 There was plenty of socks appeal on the show floor by the major vendors, most of whom showed off their new products at the Sock Bar. If there is one thing Running Insight editors like it is sock samples, and we went home with plenty. 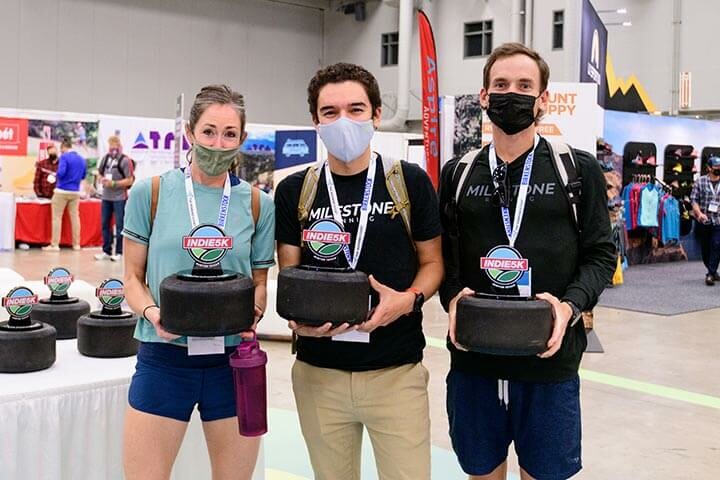 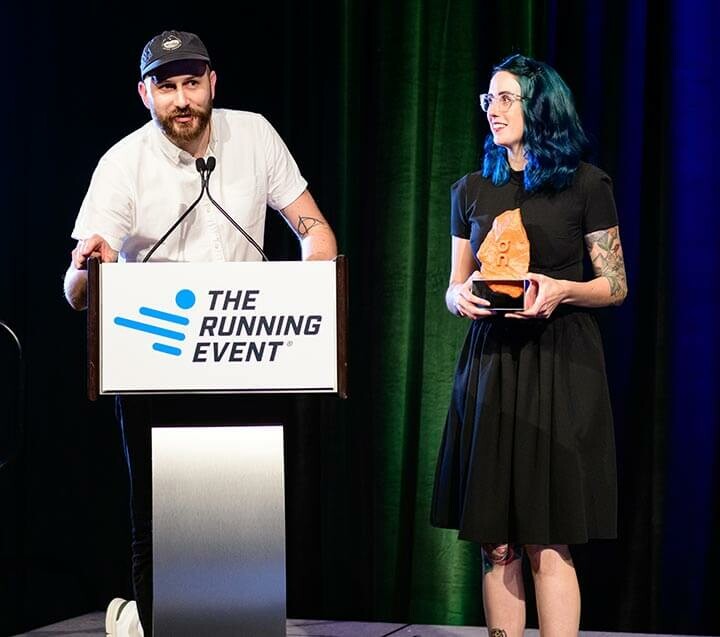 One of our favorite retailers, Palmetto Running, was overjoyed when they received the Impact Award from On Running. They certainly took that back to the Lowcountry to continue their good work impacting running and the environment at the same time. 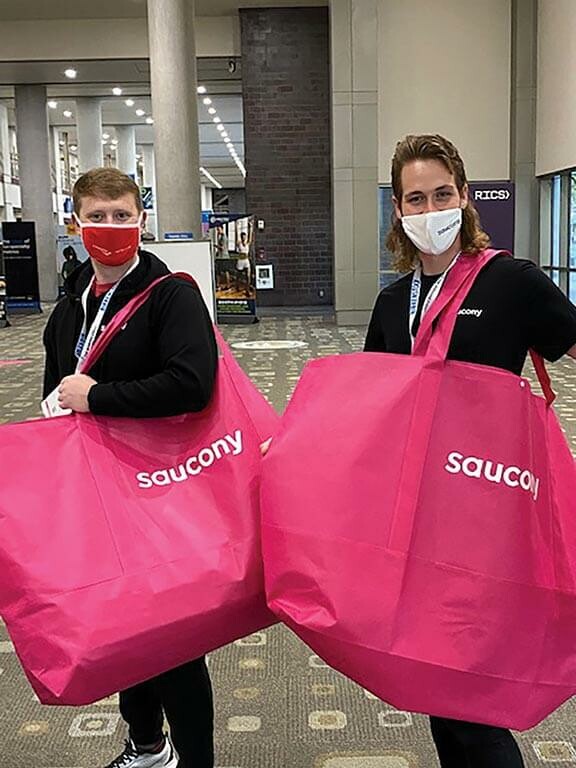 One of our favorite scenes was watching people carrying these huge pink swag bags from Saucony into the Brooks and ASICS booths. A great bit of guerilla marketing from the shoe brand that certainly got noticed by our photographers. 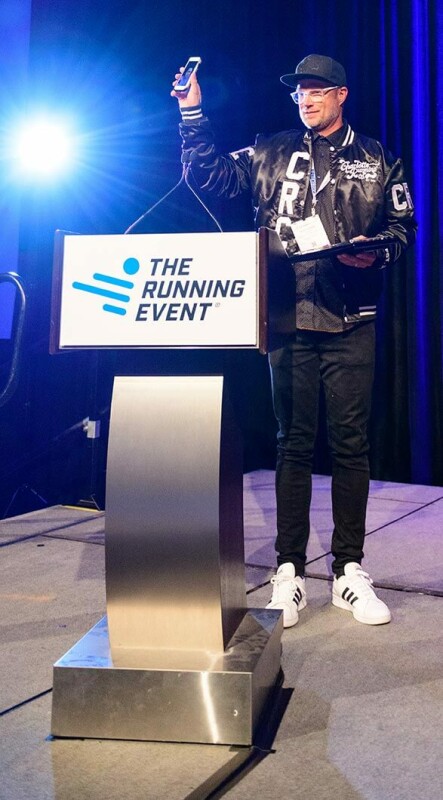 Someone had to stay back to run the store, so when Charlotte Running Company’s Scott Dvorak received the Store of the Year Award he made sure those back home could share in the moment via video. 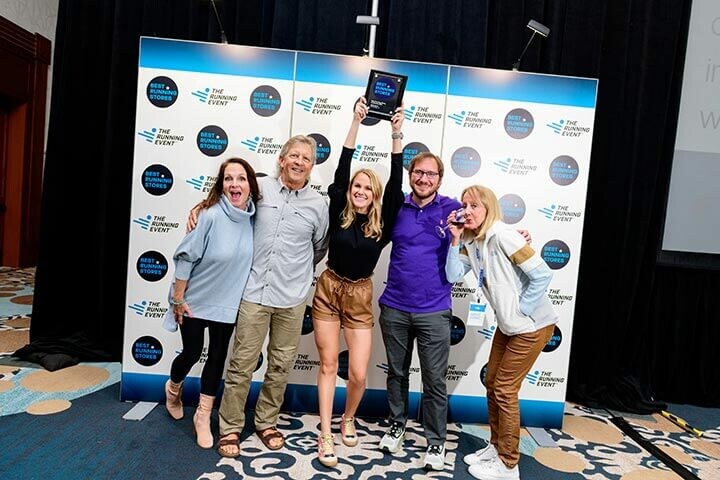 Everyone is a winner and some celebrated more than others when receiving their 2021 Best Retail Stores Award. They all deserved it after the year they all had! 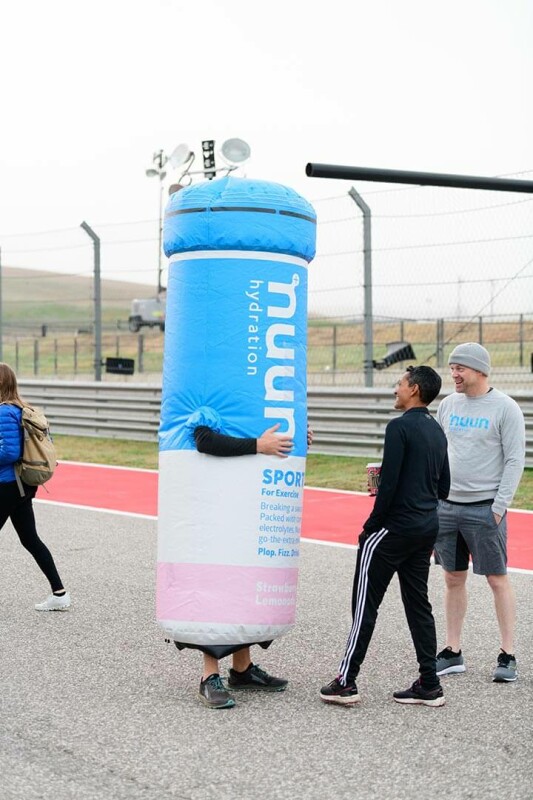 Thirsty? Nuun was providing enough hydration for everyone at the Indie 5K. “Just be careful where you squeeze me,” said the big jar. 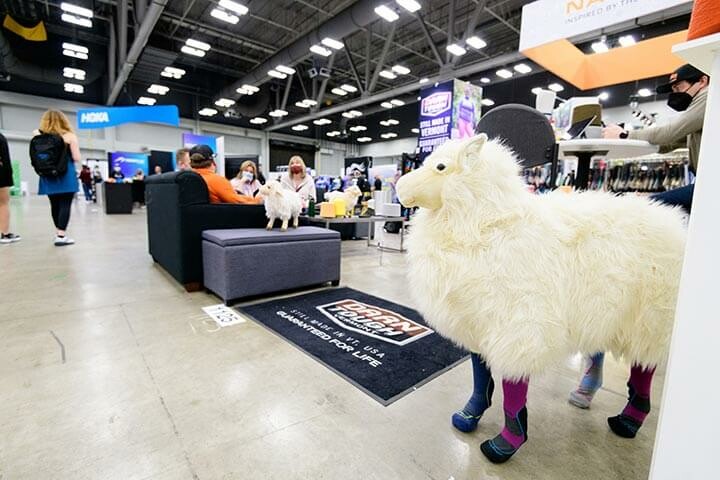 A sheep wearing socks? Sure, if you like Merino and walk by the Darn Tough booth. 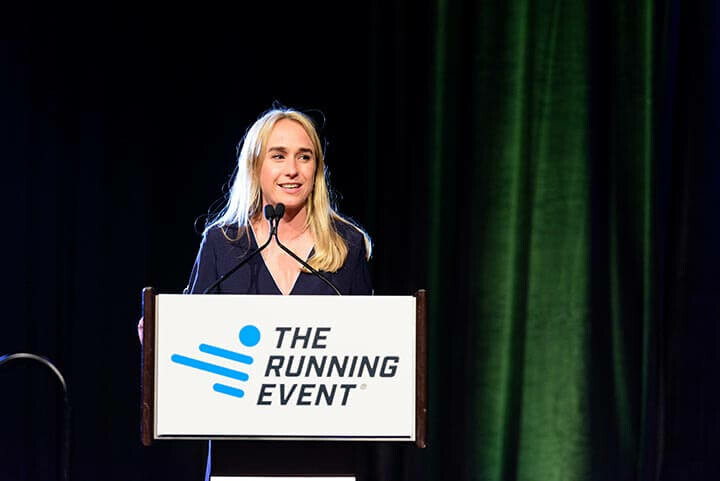 Shortly before she lost her voice completely, The Running Event executive director and publisher of Running Insight, Christina Henderson, served as emcee of the closing ceremonies and awards program. She was able to keep the program moving and on schedule, always important when there is an open bar!