Kris Hartner knows that if you’re not proactively trying grow a business, it will start declining.

He’s developed the Naperville Running Company trio of running specialty stores in suburban Chicago into a successful business by fostering a high level of customer service, investing in his employees and being shrewd about every dollar spent and earned and yet always growing. Those things helped NRC become the only two-time winner of the Running Store of the Year (2009, 2013).

He made the bold move to relocate the original Naperville store down the block to a 5500-square-foot space when the business outgrew its smaller, initial space eight years ago. In 2015, when consolidation and flat sales were gripping the industry, Hartner added a second store at the south end of town despite Road Runner Sports opening up nearby. Two years ago, he opened a third store in neighboring Wheaton, a town that had seen two previous running stores fail. Amid the growth, the NRC business is as healthy as its ever been.

In mid-June, Hartner is opening the Annex, a new 1200-square-foot retail operation seven doors down from the thriving original NRC shop that will mostly sell closeout-priced running shoes and apparel while also serving as an additional space to host promotional events for brands, athletes and big local races. It’s the same space that originally housed NRC when he opened it in 2000. 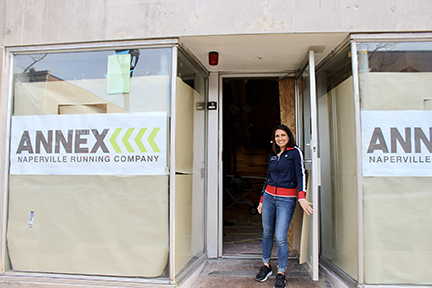 The Annex will sell the previous season’s unsold shoes and apparel from the three NRC stores – or in some cases from the previous month’s unsold gear – and possibly additional closeouts from brands if they can be acquired for the right price. For example, that might mean buying $130 shoes at 40 percent off from a brand that can then be sold at the Annex.

Hartner believes the new business will reach a different customer base that probably isn’t already shopping at NRC. That might be a discount-oriented consumer looking for a deal on last year’s models or the parent of growing kids who don’t want to spend a lot of money on shoes that will be outgrown before they wear out.

“There is a whole base of people out there that don’t come into (NRC) that don’t want to pay full retail, regardless of their income range,” Hartner says. “Our existing customers can absolutely go over there and shop, that’s not an issue at all — unless suddenly 2000 of our regular customers start shopping there. But I really think there’s a huge opportunity there.”

Hartner says NRC has always bought closeouts of its key shoe styles and mixed them in with the newer model during the try-on process to let customers decide whether they want a deal or the latest and greatest. It’s been a smart way to keep a wider customer base happy — and more importantly not lose out to a big-box store or an online discounter. He doesn’t anticipating buying any mid-range shoes from brands, if only because the tighter profit margin wouldn’t really work. As it is, Hartner says his NRC stores do much better than selling $130 to $140 premium running shoes at a discount and hasn’t succeeded selling the second-level $100 shoes at full retail.

Terry Schalow, executive director of the Running Industry Association, thinks Hartner’s new venture is a good one because it offers a differentiation to consumers within the same community.

“Whether or not you open up a separate location or not, it brings up the question about what is the right cadence for season sales and discounts without diluting the premium nature of your store,” he says. “It’s about how you can maintain community focus on a premium running store that sells running products and yet expand that to attract new customers, either with your brand or your inventory – and that might mean more lifestyle inventory or last season’s inventory like Kris is selling – in such a way that you’re reaching a different audience.”

Hartner did a low-budget build-out of the Annex and has favorable lease terms with an easy opt-out clause. That’s partially because the building owner has only rented the space two of the eight years since NRC moved down the block.

“The nice thing about doing this is that it will allow us to do some cool things with other brands that might feel left out,” Hartner says. “I’m nervous, but I’m excited. Yes, it’s definitely a risk, but it’s going to be great.”

The Running Store of the Future

Doubling Down in BKN