Flexibility has always been valued in running shoes. Could stiff soles be better?

Flexibility has long been considered a virtue in running shoes. A 1979 Consumer Guide to running shoes states, “Flexibility: This is one of the more important factors in judging a shoe. Many injuries are caused by shoes that are too stiff. Unless the sole bends easily, your foot will suffer. Bend the shoe back and forth to test its pliability. The foresole must flex.”

Nearly 40 years later, this conventional wisdom persists. Runners still take a shoe off the wall and test how easily they can bend the toe up. Magazines report flexibility scores based on a similar mechanical test. Flexibility as a virtue was bolstered by the minimalist movement, which argued that a shoe should allow the foot to move and react naturally. Even post-minimalism, the only reason most select a less-flexible shoe is as a compromise for additional cushioning and control.

Lately, however, running shoes have trended increasingly less flexible, even those designed for high performance. Brands are playing with various foams, thicknesses, flex grooves, rubber compounds and plates in attempts to increase responsiveness. The pinnacle of this movement so far comes in the form of the Nike Vapor Fly 4% racing flat, which incorporates a carbon fiber plate that barely bends at all. In light of this ground-breaking shoe, how should the runner feel about flexibility?

Simon Bartold, biomechanist, and Salomon shoe consultant points out that research dating as far back as 2000 has demonstrated that you can improve speed and economy by increasing forefoot stiffness —to a point. Past that point and performance falls off rather than improves. In the past 20 years, however, no one has been able to fully exploit this feature.

“The problem has been, no one really seems to know where that vanishing point is,” Bartold says. “The reason for that is painfully obvious — there is no uniformity in athletes. So what works for you in terms of stiffness probably won’t work for me. That’s the problem.”

In building the Vapor Fly 4%, Nike reduced the scope of this problem by designing for a specific group of elite athletes. “It is easy to produce ideal situations for athletes in a very small weight range,” says Jay Dicharry, director of the REP Biomechanics Lab in Bend, OR. The “spring” in the Nike shoes, Dicharry says, is tuned for runners with similar weight, contact times, limb stiffness and pace. 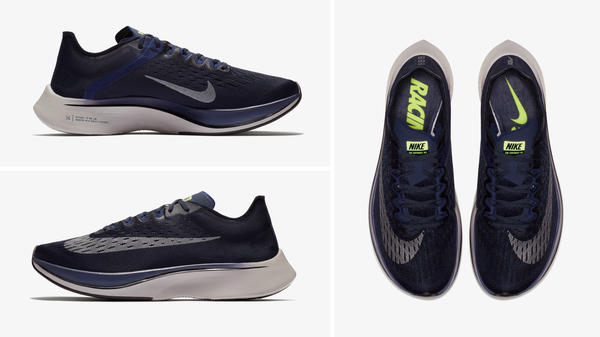 Ernest Kim, footwear innovation director at Nike, confirms that plates require greater tuning than foams. “What we’ve seen, from foam perspective, is that there seems to be a very wide range of tolerance,” Kim says. “Where there does seem to be quite a bit more subject specificity is when you start to introduce things like plates and plate stiffnesses.”

What that means is that unless you weigh 123 pounds, your marathon pace is 4:40/mile and you have similar mechanics as Eliud Kipchoge, the Vapor Fly won’t necessarily produce the same effect. It may even feel clunky.

“The stride of an elite runner is so much different than a stride of even a really talented recreational runner,” says Geoff Gray, president of the Heeluxe biomechanics lab. “Forces, ground contact time, consistency — there’s a lot of stuff that changes with a higher level runner.”

Online shoe reviewer The Ginger Runner called the Zoom Fly, which features a similar propulsion plate, “One of the stiffest, most uncomfortable rides in a long time.” Your mileage may vary. Many find the ride smooth and fast. But it isn’t going to work for all, probably only for a select few. 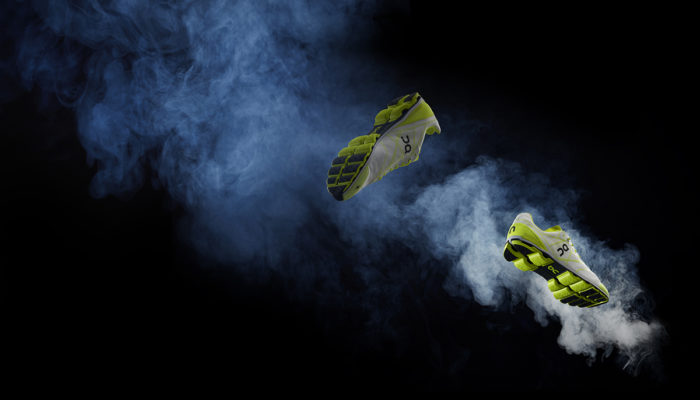 The extreme of the Vapor Fly 4% aside (few people can obtain or afford it anyway), should we start to think differently about flexibility? Should fitter, faster runners be looking for stiffer shoes?

Not necessarily. Bartold explains that shoe stiffness for stability and protection – how we’ve traditionally considered it – is a completely different application than stiffness for performance.

Confusing the issue is the fact that cushioning, rebound, geometry and flexibility all interact and change how a shoe performs. This is true with the combined effects of the Vapor Fly’s soft rebound foam and carbon plate, as well as with a traditional foam midsole, rubber outsole and flex grooves. “The reality is,” Dicharry says, “you can’t separate these things out. All you know is everything.”

You also can’t reliably assess flexibility by reading lab numbers or bending a shoe in your hands. “A shoe performs really differently on our body than when we hold it in our hands and flexing it, or a machine is flexing it,” says Gray.

Innovative, adaptive materials have changed the rules on what we think we know. “With new materials, we have more ways of separating out different properties,” says Spencer White, VP of Saucony’s Human Performance & Innovation Lab. New bouncy materials, for example, are both compliant and responsive, so a designer might be able to play with flexibility without impacting cushioning or pop. A thick shoe may appear stiff but still allow for toe flexion by sinking in under the ball of your weighted forefoot.

Then there is geometry. Light materials have provided the ability to create thick, rocker-bottomed soles that allow for forward-rolling motion of the foot without much traditional flexibility in the sole. Opinions differ on how rocker soles might alter the stride, but all agree they can work well, particularly for those with less foot mobility and stability — which is the majority.

“The reason the rocker came into being was to make for a smooth ride and transition rather than a lever,” says Zack Paris, associate product line manager at Hoka. While Paris maintains the foot does still flex and engage some in a Hoka, he argues, “The primary mover of the body in motion is not the windlass mechanism or tendons on the bottom of the foot. Maximum power output becomes less of the primary feature as soon as you move beyond sprint distances.” Hoka plays with the location and angles of its rockers to complement different strides and paces — somewhat like others use flexibility, although the correlation is not exact. 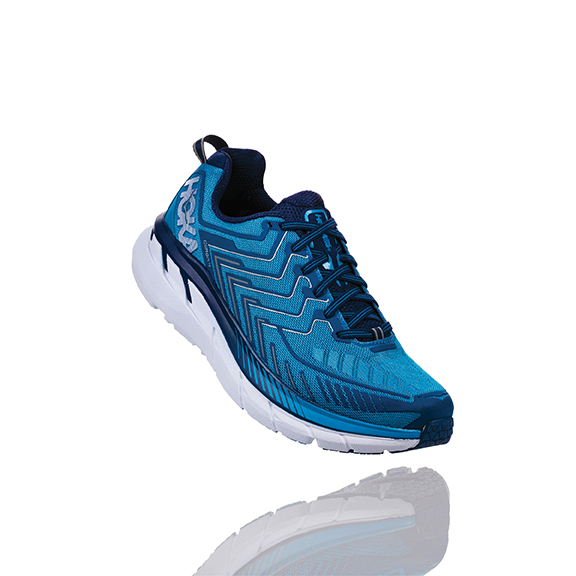 Kurt Stockbridge, footwear development VP at Skechers Performance, also distinguishes between the simple force needed to flex and how and where the shoe flexes. “The top surface [of the sole] along the foot, that is going to work with our foot and should flex and bend with the foot on that side,” Stockbridge says. “But on the bottom surface, you want it to flex in a very smooth way, in a gradual curve, a nice bow.” This affects where you want flex grooves and where in the sole a plate might be most effective — and further complicates the optimal flexibility question.

All of this has an effect on shoe selection, but first note that of the hundreds of shoes in his database, Gray says, “when we look at the isolated variable of flexibility, on body, we see very little difference in the majority of running shoes we see now. I think there are other factors that are more important in shoe selection.”

“If you increase stiffness, you stop allowing the body from doing what the body wants to do,” says Golden Harper, co-founder of Altra. “If you want to avoid injury long-term, you want to err to the less-stiff side of the scale — if you have to err.”

Experts from all quadrants, however, suggest you might want to steer runners to a stiffer shoe when it comes to performance. Be warned, however, “If you get flexibility wrong, you’re likely to contribute to injury,” Bartold says.

The key is finding that point where the stiffness stops enhancing the propulsion of the foot and starts to alter the stride. Keonyoung Oh, biomechanics researcher who authored a study that examines this breaking point, suggests starting by running in a flexible shoe and advancing the stiffness until you detect a change in how your foot bends and pushes off. “Choose the stiffest shoe which does not disturb natural joint motion,” Oh advises.

Lacking his expensive lab equipment, Oh suggests using video to help assess stride changes. Given all that is going on inside a shoe and the individuality of foot mechanics, however, he agrees with others that the “comfort” filter, or personal perception of the ride, might be even more effective at determining the level at which shoe stiffness pushes the runner over the edge.

A final test that provides a clue on whether a shoe is flexing properly is the sound filter. Bartold, Stockbridge and Heather Pieraldi, head of running footwear at Salomon, all suggest listening to the runner’s footfalls. “Is it loud or is it quiet?” Pieraldi says. “There may be a few shoes that feel comfortable. The one that feels comfortable and is quietest is probably going to be the best.”

“To some extent, stiffness has a bad rap,” says Nikhil Jain, senior manager at Brooks.

As brands play with stiffness for performance, it expands the diversity of shoes runners can consider. “Most people have experience with either moderately flexible or very flexible shoes,” says Joe Rubio, owner of Running Warehouse. He suggests encouraging runners to explore less flexible models as well, be they thick rockers or tuned racers, or both. “Let them determine for themselves which experience they prefer for which type of running,” he says.

Need Some Reason For Optimism? Reports Point to Increases In Running, Shoe Sales

Vimazi On Pace For August Debut